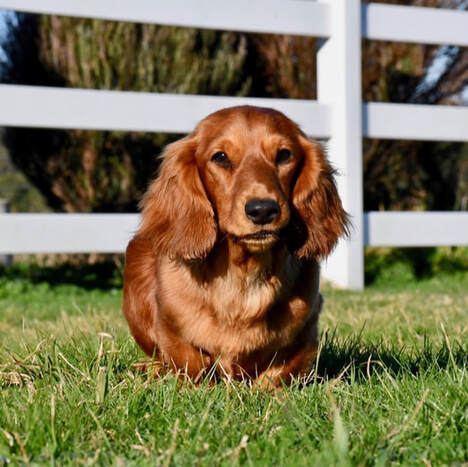 Daisy, one of our Long Haired Mini Dachshunds
Breed: Mini Dachshund
Other names: Dachie, Doxie, Sausage Dog
Temperament: vivacious, affectionate, loyal
Size:
Mini: ideally 4.5kg (though exhibited between 4kg-6kg)
Standard: 9-12kg (note we only have Mini, not Standard)
Lifespan: 10 - 15 years
Maintenance: medium
Recommended for: families, couples, singles, young and old
History of the Dachshund
The Dachshund was originally bred in Germany, as a badger hunting dog. The breed became referred to as such, deriving from "dach" being there German term for badger, "hund" referring to dog. Standard Dachshunds being the foundation of the breed, with smooth coat varieties being the initial type - later breeding in the wire haired, and long haired varieties. Each coat type has its own heritage, and this little badger hunting dog was eventually bred down in size. The smaller counterparts, the Mini Dachshund as we know them today, were used for hunting smaller species such as hare and ferrets.

The short legs and muscular build, allowed for them to be a successful burrow hunting dog - with potential to hunt those that larger dogs, would not succeed to the same level, or have the same ability. Breed ancestry can be traced back to the 15th century, and popularity of this charismatic little dog continues to maintain its position, throughout the world.

Loved and adored by many families, the Dachshund has attracted fanciers from a range of backgrounds - including notable Dachshund owners through history being Queen Victoria, Andy Warhol (whom had two, named Archie and Amos. These dogs can be seen featured in some of his paintings, and often mentioned in his journal entries), and John F. Kennedy to name a few.


Personality, characteristics and temperament
Renowned for being courageous, loyal, lively dogs whom can be stubborn at times - the breeds ancestry holds true in many pet Dachshunds today.
Though each individual will have their own personality, they remain affectionate, driven, determined dogs - with so much potential, and variation among them in their own traits.
It has been documented and noted that the three different coat types, will vary somewhat in characteristics between them, which is reflected in behaviour - as well as coat type.
For example, Long Haired types tend to be the more easy going and placid out of the three coat types (by no means as docile as a Cavalier for example, but more mellow in comparison to their Smooth Coat and Wire Haired cousins.

This affectionate and loyal breed is playful and fun loving, however early socialisation and training is imperative (as with any breed). Ensuring a balanced upbringing, will aid in raising your Dachie puppy in to a well rounded and stable dog as they mature.


Grooming your Dachie
Grooming will vary depending on the coat type. Most Dachshunds would be classed as being somewhat low-moderate in terms of shedding.
It is vital to get them use to their feet being handled, to make future nail treats easy and stress free.
Smooth Coat Dachshunds will require minimal grooming, with their wash and water coat. This wash and wear coat is simple to maintain and care for at home.
Long Haired types will need occasional brushing, in order to prevent friction matting/tangling occurring behind the ears and elbows.
Wire Haired Dachshunds are best maintained by professional groomers, where the coat needs to be hand stripped.


Training your Dachshund
Early training, socialisation and basic obedience is imperative with this breed, who though small in size - is big in might.
Puppy preschool, social outings, basic obedience and social vet visits will be beneficial.
The Dachie can be stubborn, but is loyal and eager to please. Keep training fun, and don't make it a chore. Short and regular training sessions will be more of an asset. Training your Dachie isn't just about how you "teach" them in training sessions, but what they are learning in day to day life as they live with you.
Ensure a balance between socialisation, and calm, positive, time alone - in order to prevent separation anxiety later on.

Our Past Mini Dachshund Puppies...